With the very best wishes to all my friends - Cees Sleven 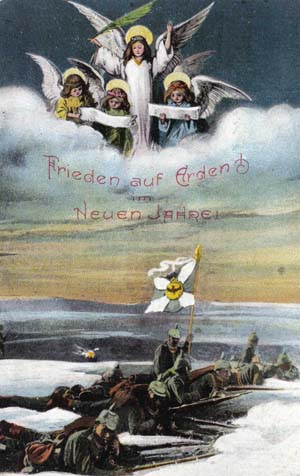 Christmas Eve in 1914
Stars were burning, burning bright
And all along the Western Front
Guns were lying still and quiet.
Men lay dozing in the trenches,
In the cold and in the dark,
And far away behind the lines
A village dog began to bark.

Some lay thinking of their families,
Some sang songs while others were quiet
Rolling fags and playing brag
To while away that Christmas night.
But as they watched the German trenches
Something moved in No Man's Land
And through the dark came a soldier
Carrying a white flag in his hand.

Then from both sides men came running,
Crossing into No Man's Land,
Through the barbed-wire, mud and shell holes,
Shyly stood there shaking hands.
Fritz brought out cigars and brandy,
Tommy brought corned beef and fags,
Stood there talking, singing, laughing,
As the moon shone on No Man's Land.

Christmas Day we all played football
In the mud of No Man's Land;
Tommy brought some Christmas pudding,
Fritz brought out a German band.
When they beat us at football
We shared out all the grub and drink
And Fritz showed me a faded photo
Of a dark-haired girl back in Berlin.

For four days after no one fired,
Not one shot disturbed the night,
For old Fritz and Tommy Atkins
Both had lost the will to fight.
So they withdrew us from the trenches,
Sent us far behind the lines,
Sent fresh troops to take our places
And told the guns "Prepare to fire".

And next night in 1914
Flares were burning, burning bright;
The message came along the trenches
Over the top we're going tonight.
And the men stood waiting in the trenches,
Looking out across our football park,
And all along the Western Front
The Christian guns began to bark.